Why Your Body May Need to Shed Some Tears, Even if You Don’t Feel Sad


Once thought to have originated and spread culturally from a single population in what’s now the Middle East, farming drastically changed our world and continues to do so to this day, for both better and worse.

But ancient genomes suggest farming’s beginning was far more complicated than a simple spread and adoption of a new culture and technology.

The genomes of 15 newly sequenced humans who lived during the Late Pleistocene and early Holocene (from around 10,000 to 7,000 years ago) along with 10 previously sequenced contemporaries paint a complex picture of population expansion, contractions, and migrations in the lead up to this massive human transformation.

Nina Marchi and colleagues used a deep sequencing technique that sequences each individual, including skeletons from the oldest cemeteries of Central Europe and the earliest farming villages in the Aegean basin, multiple times to get more complete information out of the degraded ancient DNA.

“We get much more detail about the demographic history of those populations, including population divergence, expansions, and infer admixture dates, which was really impossible to do before,” said University of Bern population geneticist Laurent Excoffier.

Using this data, the researchers could model even further back. The team found that when the last ice age was at its most severe around 23,000 years ago, genes from the hunter-gathers across Europe to the Fertile Crescent region showed that large populations intermingled across the vast geographical expanse.

Then the pressure and scarcity that came with the frigid climate rendered this group, first into two and then into three isolated populations. A big drop in genetic diversity suggests the European hunter-gatherers encountered massive struggles, causing them to dwindle almost to extinction.

Locations of some of the sequenced genomes and key sites. (Marchi et al., Cell, 2022)

Now it looks as if they were much more interconnected until the environment forced them to retreat into the refuge of the milder regions.

The team estimates the population may have dropped to fewer than 400 individuals, which is backed by archeological evidence that estimated a 60 percent decline during this period.

These populations expanded again during the warmer periods, with the middle group centered around the Aegean region and the eastern group around the Fertile Crescent intermixing before being separated and further fragmented by the cold Older Dryas period 13,800 years ago.

It was from this mixed group in central Anatolia that some of the early farmers arose around 12,900 years ago, following another connection with the European hunter-gatherers and reconnection with the population they split from now in the Levant. They then expanded into the west, becoming the ancestors of many people all around Europe today. 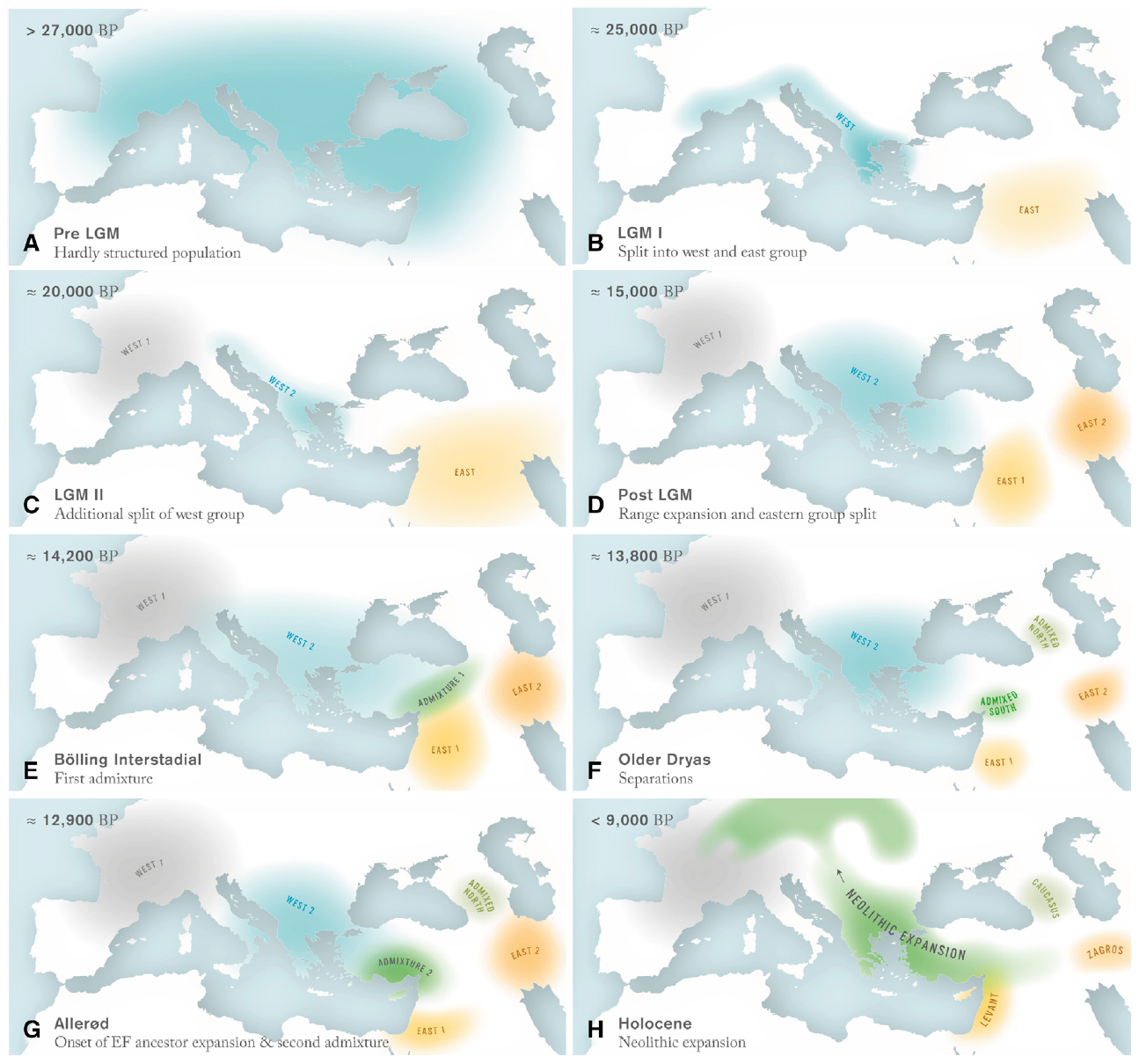 Timeline of the populations around Southwest Asia and Europe in the lead up to the transition to farming. (Marchi et al., Cell, 2022)

“Strong [genetic drift] during their expansion through Anatolia contributed to making western early farmers look more dissimilar than they actually were and somehow concealed their hybrid nature,” the team wrote in their paper.

“This model provides a time frame for the differentiation of the major groups populating Southwest Asia and Europe from the last glacial maximum until the introduction of agriculture and highlights the crucial role of climatic changes as driver of population fragmentation and admixture events.”

These findings support the theory that after an initial spread of farming in the Fertile Crescent through cultural adaptation, farming spread from this region through to the Aegean Basin and beyond via demic diffusion – migrating populations that expanded, mixed with and/or displaced previous inhabitants rather than cultural transmission.

Marchi and the team explain we really need equivalently high-quality genomes from the Fertile Crescent and central Anatolia to confirm these scenarios and fill in a lot of the remaining gaps, but every study across different fields adds further insights into the timeline of this civilization birthing event.

This research was published in Cell.

Is it the end of the FAANG era? Why the market has turned against tech stocks

Is it the end of the FAANG era? Why the market has turned against tech stocks