HSBC has pledged to restore its dividend to pre-coronavirus pandemic levels as soon as possible as Europe’s biggest bank pushes back against pressure from its largest shareholder Ping An to divide its Asian and western operations.

The UK-based lender reported profits before tax of $5bn in the second quarter of the year, beating analyst estimates of $3.9bn, but falling slightly short of the same period last year, when profits were $5.1bn.

HSBC’s profits for the first half of the year fell 15 per cent to $9.2bn as the bank took a net charge of $1.1bn for expected credit losses and credit impairments as a result of heightened economic uncertainty and inflation. The charges more than offset the positive impact of rising interest rates on its balance sheet.

“Our first-half performance reflected much of the progress we have made since 2020, with good organic growth across the business and tight cost control,” said chief executive Noel Quinn.

“We are now two and a half years into our transformation programme to make HSBC fit for the future.”

The bank is battling a public campaign from Chinese insurance group Ping An, which owns about 9.2 per cent of its shares, to spin off its Asia business and list in Hong Kong. It has hired Goldman Sachs and boutique advisory firm Robey Warshaw to come up with a detailed defence strategy. HSBC’s top executives will face its shareholders in Hong Kong on Tuesday.

Quinn said in the results announcement that the bank “appreciate[s] the importance of dividends to all of our shareholders. We will aim to restore the dividend to pre-Covid-19 levels as soon as possible.”

The Bank of England restricted UK lenders from distributing dividends to shareholders during the pandemic as part of emergency measures to improve the resilience of the sector. It lifted the ban in July 2021.

The cancelled dividend was one of the crucial reasons behind Ping An’s call for HSBC to be broken up. The insurance group wants the bank to base its Asia operations in Hong Kong, which would put it out of the reach of the UK central bank.

Reported revenue was $12.8bn in the second quarter, which was in line with analyst expectations, and about 2 per cent higher than the same period last year. For the first half of the year, revenues were $25.2bn, marginally lower than last year because of planned business disposals and foreign currency impacts, said the bank.

HSBC has been exiting non-profitable businesses in the west, including in the US and France, and reallocating capital to Asia and the Middle East. In the first half of the year, it acquired insurance business Axa Singapore and increased its ownership of Qianhai Securities, its investment bank in mainland China, to 90 per cent. It also agreed to sell its business in Greece and Russia. 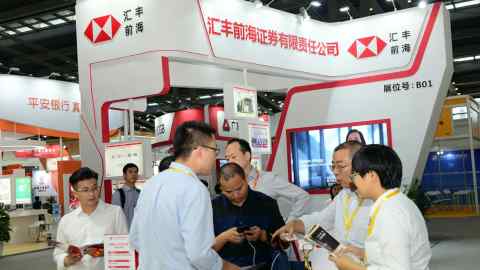 HSBC said on Monday that it would pay an interim dividend of 9 cents a share but warned that share buybacks were unlikely this year.

However, it raised its return on tangible equity goal to at least 12 per cent from 2023 in a sign of growing confidence that it can increase profitability, and pledged to resume paying quarterly dividends in 2023.

The bank said that its estimated credit losses were at a “more normalised” level compared with the Covid-19 releases last year, which helped drive up earnings, and had been affected by the Russian invasion of Ukraine.

Salsa and spaghetti sauce are under threat as the worst drought in 1,200 years threatens California’s tomato crop