Scientists have discovered a previously unknown communication pathway that allows fat cells to directly “talk” to the brain — at least in mice.

The team visualized these hidden sensory nerve pathways using a technique that made the animals’ tissue transparent. When the researchers destroyed the connection, the mice burned more fat. That raises the possibility that disrupting this communication network could one day help treat obesity, assuming the findings could be replicated in humans.

Previously, researchers knew that the brain used the sympathetic nervous system to tell the body to burn more fat; this branch of the nervous system directs the “fight or flight” response and taps fat as a key fuel source for the body’s organs. In other words, researchers already knew how the brain used neurons to send one-way information to fat. But scientists thought that communication in the other direction–from fat to the brain–was less direct, with fat sending the brain messages by releasing hormones into the bloodstream, study lead author Li Ye, a neuroscientist at the Scripps Research Institute in La Jolla, California, told Live Science.

⚡ How To Lose Weight Fast With Meticore ⚡

The new study found that fat also sends messages to the brain through sensory nerve cells, or neurons called the dorsal root ganglia. The dorsal root ganglia (DRG), whose cell bodies sit close to the spinal cord, extend long wires into the peripheral organs and thus receive sensory information from the body to send to the brain via the spinal cord. Researchers have long known that the DRG ferries information from skin and muscle to the brain, but the new study is the first time that researchers have found that the DRG also receive and transmits sensory information from fat. Researchers already knew that the DRG sent its projections into the fat tissue in rats and hamsters, but they had not been able to determine exactly what information the neurons were transmitting due to the difficulty of visualizing the neurons across long distances and manipulating the DRG without also affecting the sympathetic branch of the nervous system. Researchers overcame both those hurdles in this study.

In this study, Ye and his collaborators fluorescently labelled the DRG neurons that extend into fat tissue. Using a system they developed previously (opens in new tab) that renders animal tissues transparent, they could see the paths of the DRGs from their origins near the spinal cord all the way to areas of fat, otherwise known as fat pads, underneath the skin. 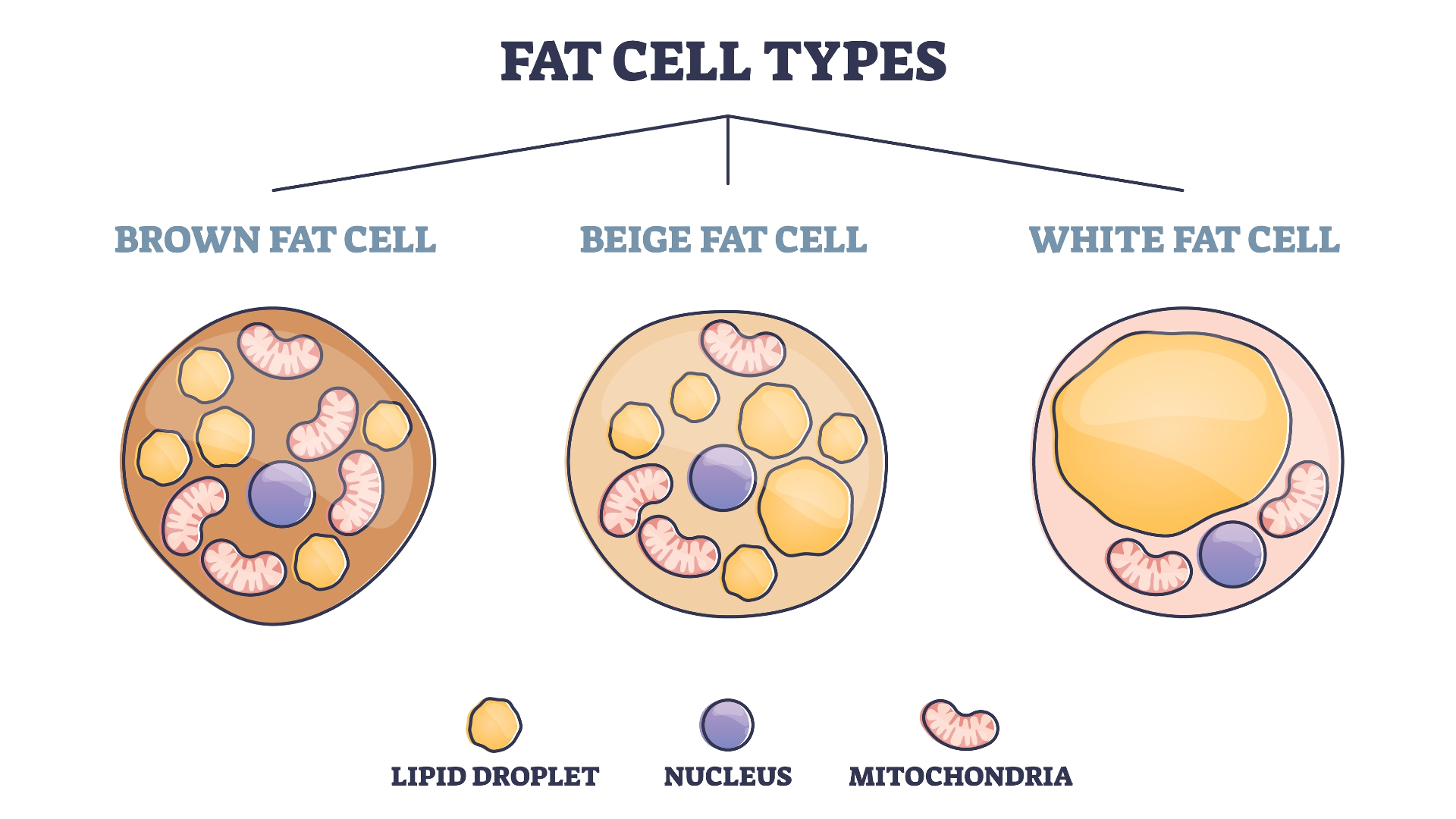 The researchers identified connections between DRGs and several different regions of fat tissue in the mice, Ye said. They focused in particular on a beige fat pad called the inguinal white adipose tissue.

Fat comes in several colors depending on how the body uses it, Ye said. Brown fat gets its color from a large number of mitochondria it contains. The body burns brown fat to generate heat and increase body temperature in response to cold. White fat, in contrast, is mainly stored. Beige fat is intermediate between the two. When the body needs to burn fatter, beige fat becomes browner and the body burns it to generate heat. When the body doesn’t need to burn fat, the beige fat becomes whiter.

Until recently, researchers thought that in humans, only infants had brown and beige fat, but since 2009, researchers have been accumulating evidence that adults have it too (opens in new tab), Ye said. The researchers chose to focus on beige fat in this study because it is dynamic: it can become browner or more white and can generate more or less heat in response to environmental changes, Ye said. Another reason the researchers chose to focus on beige fat is that because of its dynamism, it has great potential to affect metabolism, obesity, and other clinically important outcomes, Ye said.

When the researchers used a virus to destroy the DRG neurons that connected to this beige fat, the mice burned more fat: Genes related to fat production and generating heat ramped up; the animals’ beige fat pads grew as they generated more fat to burn. This does not mean the animals were getting fat. The mice did not gain weight after the destruction of their DRGs. Ye explains the paradox by explaining that to burn fatter, you also need to generate more fat as fuel. He also notes that the growth of the beige fat bads was relatively small. “We are talking about a 0.03g difference in fat weight over a 25-30g mouse body weight,” he told Live Science in an email. Because of all that fat burning, the animals’ temperatures rose.

Their beige fat also became browner, a sign that the fat store was shifting from fat storage to fat burning.

So when the researchers cut the brakes by killing the DRGs connected with beige fat, the animals burned more fat, which generated heat and caused their temperatures to rise. Their beige fat pads grew because they were converting existing sugars and fatty acids from the blood into more fat to burn, not because the animals were gaining weight, Ye said.

The researchers hypothesize that when this brake system is intact, it tells the brain how much fat is being burned and makes sure the body doesn’t burn too much of it. In the future, he would like to investigate how to manipulate this communication to cause an animal to burn fatter with the hope of eventually helping people with obesity to lose weight.

“If you can fine-tune or modulate the brake either alone or together with changing the sympathetic activity, then potentially you can argue that you will have a bigger effect if you’re trying to burn fatter,” Ye said.

The findings were published Aug. 31 in the journal Nature

Scientists Are Hunting For Alien Artifacts Across The Solar System. Here's Why : ScienceAlert Jupiter will be at its closest to Earth today (Sept. 26) in 59 years